There is only one way to play football – like it was played in the good old days. When were those good old days – and what were was the game actually like? As has become custom, there is plenty of discussion about the death of football. Hand passing, cynical fouling and blanket defences are the problem. Perhaps amazingly Joe Brolly would like Mickey Harte (and every other manager) to entertain the masses. Yes Inter-County Football is essentially an entertainment product but it’s not Mickey or Jim or Rory’s responsibility to entertain is it?

I’m sure Brolly is not adverse to the limitations of eye-witness testimony and it is worrying that he commands such an audience and bases his thoughts on the current game on his own eye-witness testimony. Tainted by every conceivable bias and very strong beliefs that there is simply only one way to play football, he is dealing in opinion rather than facts, which is his prerogative I suppose.

I wanted to look at the facts. Let’s deal with the death of football and see what that looks like – maybe we can even come up with some ways to fix this dreadful game!

Let’s start at the most basic of points. Scoring is UP

Ok that cheats a bit – there are more games than ever. But it’s the highest scoring championship since the qualifiers. So how about average scores in Championship games since 1970. It still UP.

If football was truly getting too defensive wouldn’t you expect to see scores decreasing? Instead we find ourselves not just with the highest scoring Championship ever but the highest average per game.But maybe scoring is not entertaining?

What about winning margins. No Change!

So we have the highest scoring championship – and again despite the rhetoric the gap between winners and losers is growing. It was the same in 2014 as it was in 1970 and has fluctuated wildly in between 4 – 9 for the last 40+ years.

Not all scores are created equally. Just because scoring is up that tells us nothing about what type of scores. Surely now there is a bigger % being scored from free than from play? My database doesn’t break this down for every game, however we can work with samples(televised games). Looking at games from the last 3 years (league games and at least 500 scores per year) we can see the breakdown of scores. 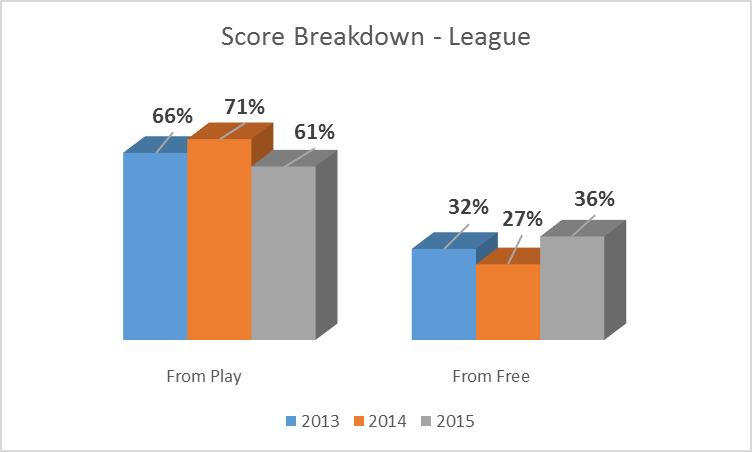 From this we can see that the breakdown of scores has changed – is it a dramatic change? I will leave that for you to judge.

What about Championship games? 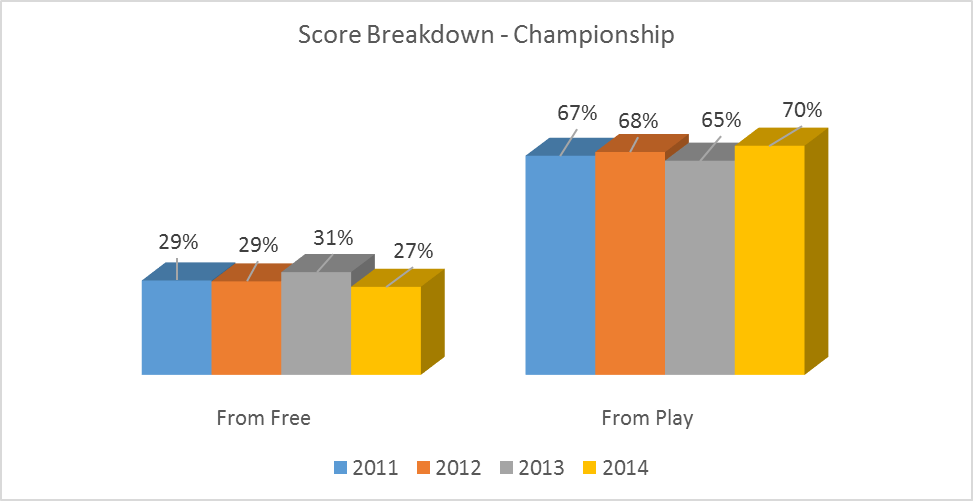 More scores came from play in 2014 than the previous 3 years. These are very minor changes – but hardly a signal for the death of football?

Is hand passing up? YES

Is foot passing down? YES

Is Shooting up? Yes

Did the number of fouls decrease in 2014? YES

I have no issue with what direction the game takes – that is up to higher powers than me. You might not like hand passing and what to see more high-fielding and that’s fine. My argument is please be clear what you mean by the death of football. Is it just the style you don’t like? That’s a very subjective opinion to hang the future of a sport on. Any analysis of where the game is at and monitoring its future should at least look at the facts and not just rely on eye-witness testimony.

The death of football looks distinctly like it’s past!