As the new season rolls around, no doubt most inter-county managers are busy compiling back-room teams and scouring the county for new talent. This year will see a spate of new managers taking the helm and everyone is keen to impress, promising everyone a fair crack of the whip again. I am interested in how much that change happens at better or worse counties. Or maybe it’s simply that successful teams don’t see to the need to change, as much, as less successful counties. However at what point does all this change mean that building anything sustainable becomes impossible. What about long-term planning?

I wanted to take a look at the size of particular squads and how that might have changed over the last few seasons. Do successful teams have bigger squads or smaller squads? Do they use more or less talent than others?

Data: The data is from 2012 – 2015 and I have used a *sample of counties for illustration. Championship games only.

The first graph shows simply the number of players used by each county in the last 4 years. 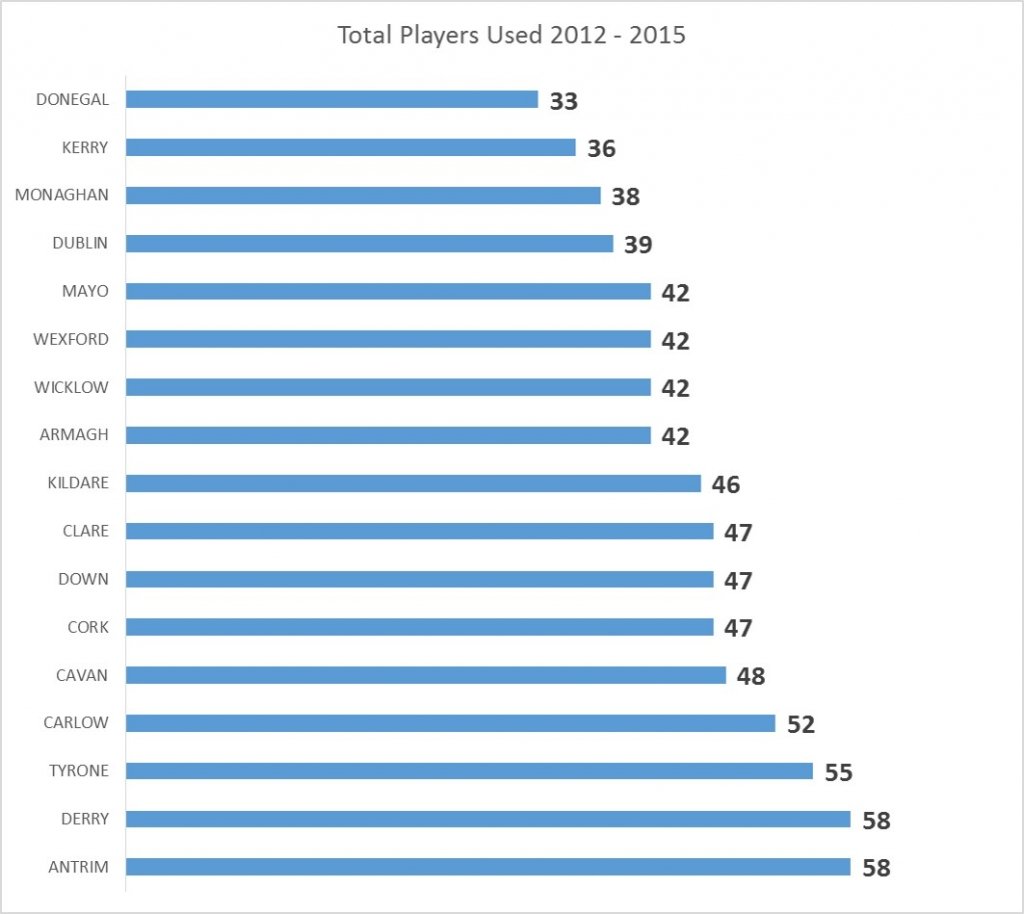 Donegal at the top seems like no surprise, but then look at the 5. Of the last 16 provincial titles available, those 5 teams have won 15 of them!! (Cork won their’s in 2012).

So is squad size really an issue? Is strength in depth as important as we think? Should instead a county be looking to develop a core group of players.

There will be timing issues. Maybe Cork & Tyrone are just at a particular stage in their team’s life-cycle, but it is interesting to note that they have really struggled to be successful on the pitch and in that time have found themselves using 47 and 55 players over the last 4 seasons. When you look at the sheer number of players teams like Antrim, Carlow & Derry have used and consider that these counties do not have long championship seasons it really is staggering to think about that level of player turnover.

So perhaps total players doesn’t tell the full story. Mangers might be happy to throw some young players on when a game is won or they know the season is about to end. The next graph looks at Core Players – those that have started at least 1 game (in blue) and those players who have only featured as substitutes (in orange). 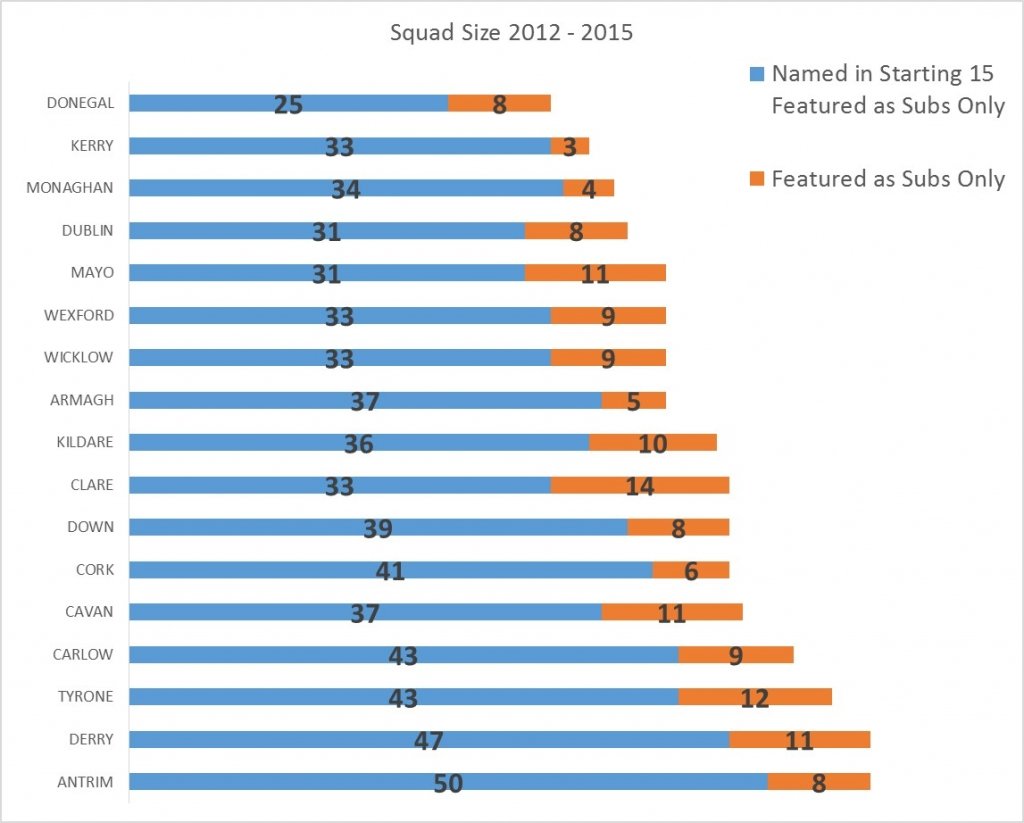 Donegal definitely jump out here as having by far the smallest Core group. Only 25 players have started a game for Donegal since 2012. But again we need to ask – is that important? While the other (successful) counties have used more, it’s not like they have used double the amount. We see a very similar pattern to the first image with some exceptions.

Clare seem to have a core group of 33 players but have use 14 different subs, perhaps suggesting that while the core has remained relatively steady there is high turnover in the fringe players. Wexford and Wicklow look to fall into a similar pattern.

Again Cork and Tyrone seem to have big squads but have also used many different starters and combinations. Hardly the sign of a settled squad or team.

Do successful teams have small squads because they are small or are they small squads because they are successful. That question will take me a little longer to answer but I’m not sure I buy the idea of more is better. Despite all the talk of the importance of a big squad it seems the answer probably lies somewhere in the middle. Getting a good group of core players who you can work with over a consistent period of time, but not so small you burn them out.

McGuinness often spoke of working with teams in a 4 year cycle, similar to Olympic athletes. But how many mangers are given that time? So as managers contemplate shaking things up for the season ahead – they need to ask at what cost does the shake up come?