Most sports around the world have some sort of ranking system. It’s not a new phenomenon but has some real merit in Gaelic Football. The team that lifts Sam has achieved all they need – but how do you asses all the other teams that have competed. New managers come and go but have they improved the team?

The structure of the GAA season does not lend itself to direct comparison from year to year. However if you develop a clear ranking system for teams you can assess how 1 team has done year on year. Good or bad has the team improved?

There is an explanation of how the system works at the bottom of this page, but it is based on a very similar system to FIFA world rankings. Points are awarded for a Win or a Draw with additional weightings being added for the Competition, Opposition Ranking and Historical Weighting. 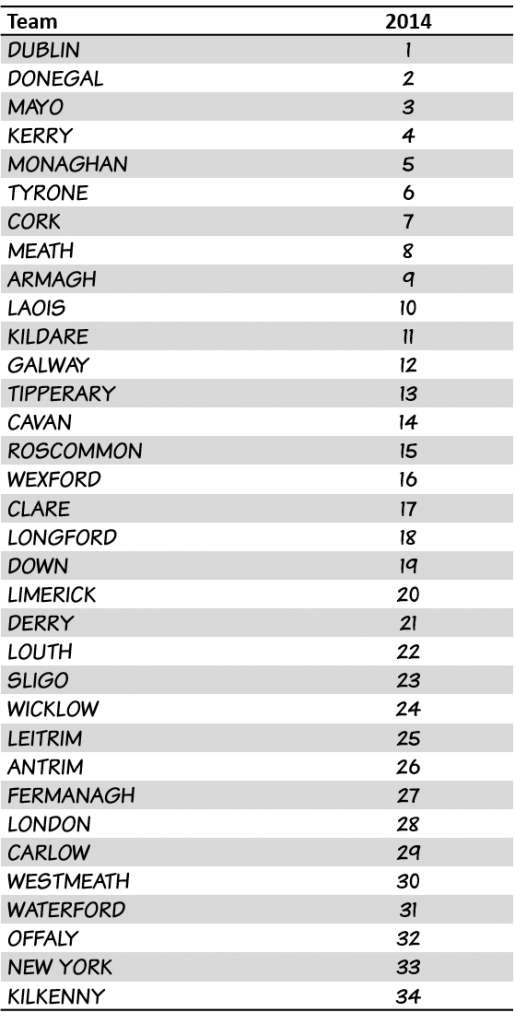 Want to see how teams have moved up and down over the last few years? Check out this historical table.

I’m sure it will create plenty of discussion – no system is perfect but it’s as objective as any system in determining how well a team has done over the years. And remember this is just a bit of fun!

So how does it work?

This is based heavily on the system FIFA use to rank International Football Teams and works like this.

Not all games are created equally to we apply a weighting to each game type.

This makes a championship game 5 times more important than a league game. Most teams are judged on their championship form so I think that gap is justified.

At the end of a season teams are ranked 1 – 34 – this ranking forms the basis for the Opposition Ranking in the subsequent year. This means beating a team ranked higher will get you more ranking points than beating a team of lower ranking.