It’s a different game these days. Impact subs and panels that extend beyond 30. “You need a big panel of players to cope with the demands of the modern game with it’s physical demands” they say. Even rules changes now allow for more players to take the field with Black Cards and additional substitutes.

But I wonder what the evidence says. Are any of the above statements true? Are we seeing counties use more players and as a result this is to the detriment of the ‘weaker’ counties with limited playing populations.

To try and answer this question I can now delve into my Player Database which goes back to 2006 and take a look at the evolution or lack thereof of squad sizes. Granted it would be great to look through the last 125 years of squads but that will take me a bit longer to organise. For now we can use 2006 as our starting point and 10 season should give us some indication of change, if any has happened.

In 2006 the average number of players used by 31 counties* was 24.3 and 10 seasons later in 2015 it’s now 25! Yes on average squads are using 1 extra player. That doesn’t seem like a big change to me and certainly doesn’t fit the narrative of this new game they are all playing. Whatever playing resources a County needed in 2006 is very similar to what they need today, as you can see from the almost flat line plotting this average over the last 10 years.

So that looks at overall how many players were used, but doesn’t really distinguish between starters/subs. So let’s look at the average number of starters counties have used and see if that has ‘evolved’ over the last decade.

So on average team used less starting players in 2015 than they did in 2006. It’s not a huge change and has hovered around that figure consistently. Counties are using 1 extra player but that’s mostly just an extra sub, the number of starting players is static.

The Have’s v Have Not’s

So we can take this a stage further, let’s look at the difference between good and bad teams. You can argue the toss over successful and unsuccessful for the last decade but let’s say it’s Dublin, Cork, Kerry and Mayo (at least 3 AI Final appearances). We can then compare those 4 teams v’s the rest to see if there is any differences of note.

First point is there is very little change over time. Successful teams are using the same amount of players as they did in 2006 as are Unsuccessful teams. There does seem to be a difference of about 1 player but this gap has not widened.

Again – I can see no evidence of the evolution of bigger squad sizes. 2015 looks a lot like 2006 for both groups. The gap here again is around 1 player.

I think what is clear from this is that the season to season difference is negligible and even looking at the data county x county doesn’t shed any light on it either.  In a single season all counties tend to use the same playing resources. So is there anything useful to be gathered from squad sizes?

The final graph I will share today is the number of individual players a county has used over the last 10 seasons. This includes starters and subs but should give an idea of player turnover in that time. 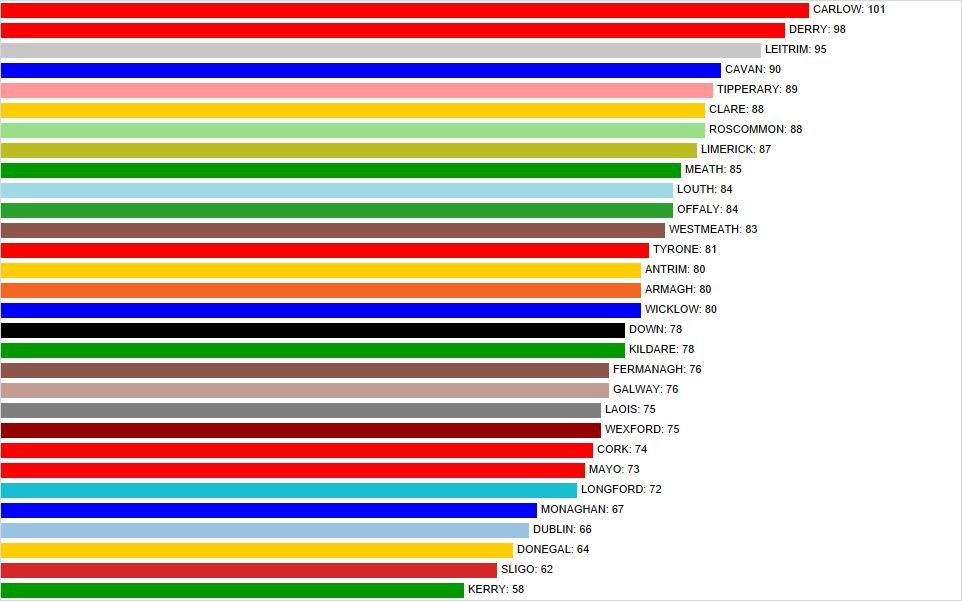 10 years is a big time frame to look at. Squads will go through transition periods but at just 58 players Kerry have used the fewest players.

Does success lead to stability or does stability lead to success? Looking at these numbers and especially looking at the above graph since 2012 it seems to me that unsuccessful teams don’t lack for players but they do seem to struggle to retain the same players. In any given year they use the same quantity of players as the best teams, the issue is not enough of them are the same players as the previous year.

A herd of buffalo can only move as fast as the slowest buffalo. The unsuccessful teams are constantly playing catch up with their new/slowest buffalo(s).

*For reference including London and New York doesn’t really change these numbers at all but for the sake of this I have left them out.