It can be hard to rank forwards in any meaningful way. Teams play such a diverse range of opponents and styles that simply looking at Total Scores or Shooting % can be a bit misleading and counter-productive. I wanted to look at a way that would allow for a better comparison of forward play, accounting for both their style and efficiency from play. Copying some of the techniques used by Kirk Goldsberry in his much acclaimed Basketball paper we can come up with some nice and simple techniques to achieve this. 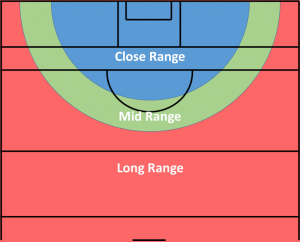 The idea is quite simple. Break the ‘scoring zone’ into 3 very distinct areas.

Long Range: Any zone not included in the above.

The image on the right shows what this looks like overlayed on a pitch.

Within each range we can look at two things.

The table below shows both the Frequency Splits and Efficiency Splits for 4 marquee forwards.

To take Bernard Brogan as the example.

By contrast we can see that Michael Murphy shoots 60% from the Close range but only takes 33% of his shots from that zone. This reflects a very different type of forward. Murphy’s role is much broader than Brogan’s and this is reflected in the Frequency Splits. All other things being equal, if Murphy was getting the same shots as Brogan we would see a 12% higher conversion rate.

Obviously the standout forward in terms of efficiency is James O’Donoghue with 70% from close range and 53% from Mid-Range. The fact that he takes such a large amount of shots within the Close-Range helps a lot and should worry any opposition. I have less data for  O’Donoghue than other players and it will be interesting to see how he gets marked in 2015, but looks like you won’t find him taking many shots from +40 meters.

Cillian O’Connor had a phenomenal year this year and his numbers are impressive in the Close-Range, but push him out a bit further and defenders might see a bit more joy as his return dips below the average.

This method allows us compare styles through the Frequency Splits. This differences in playing style can be dictated by the player themselves or the management but either way it offers us hard of evidence of just how different these 4 forward are. Combining the frequency and Efficiency splits allows us compare different forwards given similar shooting opportunities. Perhaps surprising is that Bernard Brogan is below average in the Close and Mid Ranges. There is obviously more to his game than just shooting, but given the same opportunities the average forward would convert more often. Murphy’s role is also intriguing, no doubt he offers something anywhere he plays but, based on these figures, it’s quite obvious how devastating he is close to goal.