Training age is the cumulative amount of time you’ve spent training for a particular sport. It refers to a cumulative workload (and skill level) built over years and years.

This of course is not just about time. I’ve been driving for 16 years and I’ve seen very little improvement. You need to be in and around environments that push you, have coaches or mentors that test you constantly to evolve and get better.

As a player moves from club to county the premise is that he is now exposed to better coaches, surrounded by better players in training and playing a higher standard of opposition. All of these factors should contribute to a player and team’s development.

To bridge the performance gap teams started to put in more hours. Early morning training and extra sessions were a plenty. But there are only so many hours in the day. Counties are finally realising that more does not necessarily equal better. Now there is more emphasis on talent both on the pitch and behind the scenes.

This week Andy McEntee highlighted the importance he placed on having his preferred Strength and Conditioning coach as part of, not just his management ticket, but the entire Meath set-up.

“To be perfectly honest, it was part of the gig when I came in. I would have been reluctant to do it without him, that is how much I regard him.”

He is now fulfilling a role similar to Bryan Cullen for Dublin or Cathal Cregg for Connacht. You can expect many other counties to follow suit, counties employing expertise to work across an entire system rather than on a nod and a wink from the senior manager.

It highlights the importance of getting the right people in behind the scenes. But the nature of the competition structure builds in a constant disadvantage. Successful teams play more games and by extension have longer seasons (under expert supervision).

Last season as we mentioned Dublin began their competitive season in January and ended it in October. Wicklow were out by the middle of June.

What is startling when you look at the actual figures, the cumulative effect of shorter seasons means there is a built in sense of the inevitable about the inter-county scene.

Even if the much maligned county board could stump up to hire all the ologists possible, unless teams start winning and making their season longer it’s hard to see them ever catching the big guys.

The table below shows the week each county has finished their season in for the last 10. For example in 2016 Dublin & Mayo finished in week 40 while a team like Down finished a full 14 weeks previously. 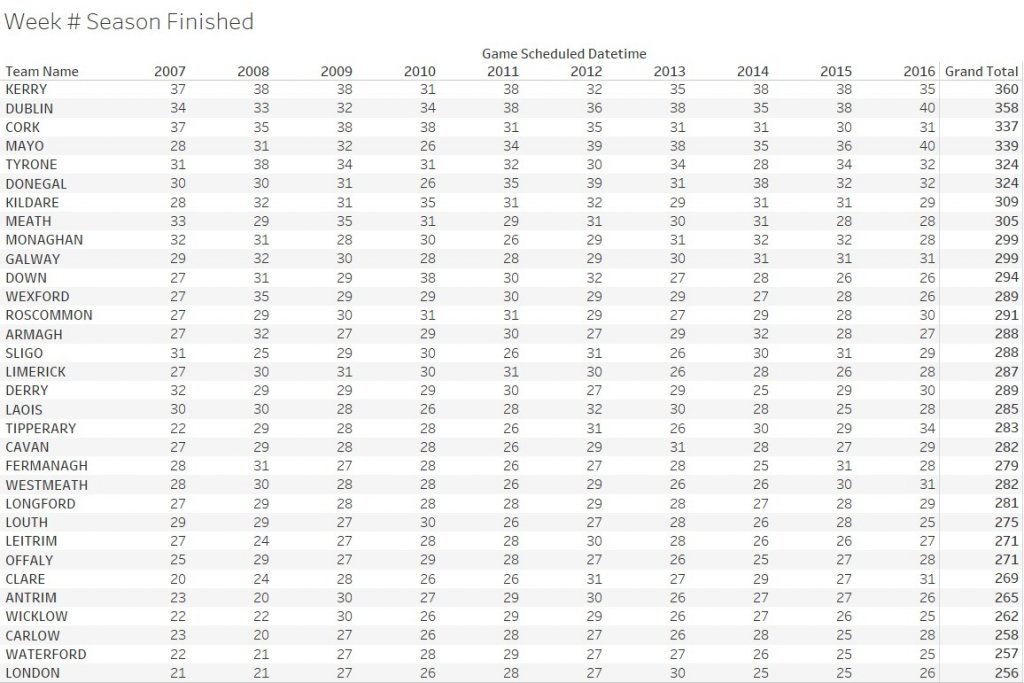 Taking an average of just 3 training sessions a week that’s at least 42 training sessions. Even if you said the backroom teams of these two counties were of equal quality (and that’s an unrealistic assumption) that’s a lot more expert-led training those Dublin players have over Down. Starting the 2017 season Dublin are at least 42 sessions and 7 games ahead of Down, all other things being equal.

When we add this up over the course of say 10 years we can see that Kerry and Dublin average a season of about 36 weeks while mid-tier teams like Armagh, Kildare & Roscommon have seasons lasting just 29 weeks.

That’s on average about 7 weeks per year which is over 200 extra training sessions in a 10 year period. (again assuming our 3 sessions a week measure)

Build in the squad turnover most teams outside of Monaghan, Donegal, Dublin and Kerry have and you can see a huge discrepancy open up between the have’s and have not’s.

I had this conversation recently with a manager from a weaker county. There were the usual grievances about receiving a more level playing field in terms of financing but what really transpired was that without extending the season (games and time) his players would file back to the clubs where the structures just aren’t there to keep the development going.

I’m no believer that we should create an artificial method to get weaker teams into the semi-finals. Any competition should be about getting the best to play each other but the different season length has a big impact on the ability of the weaker counties to make up the difference, even if the funding is in place.

Staying alive in the championship has many upsides (not least you might actual win something) but not to be underestimated is the amount of training time these players receive or more importantly the weaker county players miss out on. Having additional games is vital but if the actual season length allows for such large discrepancies it’s hard to see teams making those giant leaps forward.